A quadrilateral is a four-sided polygon (polygon with four sides, four angles, and four vertices).

In a quadrilateral, the sum of all the angles equals 360º degrees.

A Square is a quadrilateral with four right angles and all four sides of equal length. 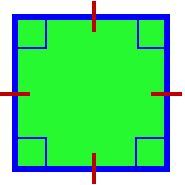 A Rectangle is a quadrilateral with adjacent sides perpendicular (all four angles are therefore right angles). The opposite sides are parallel, and of equal length. 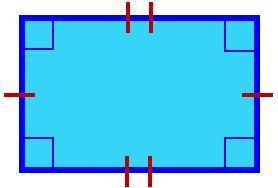 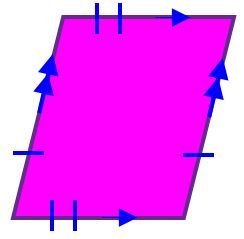 A Rhombus (or equilateral quadrilateral) is a parallelogram with all sides equal, the opposite angles of a rhombus are congruent. The diagonals of a rhombus bisect each other. A rhombus with right angles is a square. The opposite sides are parallel. Consecutive angles are supplementary. 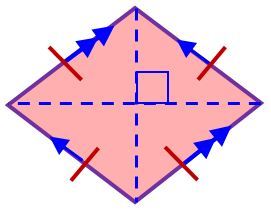 A Trapezoid is a polygon with four sides, two of which (the bases) are parallel to each other. The non-parallel sides are called the legs of the trapezoid.

An isosceles trapezoid is a trapezoid with congruent legs. The base angles (the angles on either side of the bases) are congruent.

A Kite is a quadrilateral with two pairs of sides next to each other that have equal length. But none of the sides are parallel. 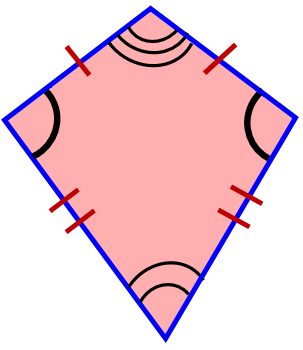 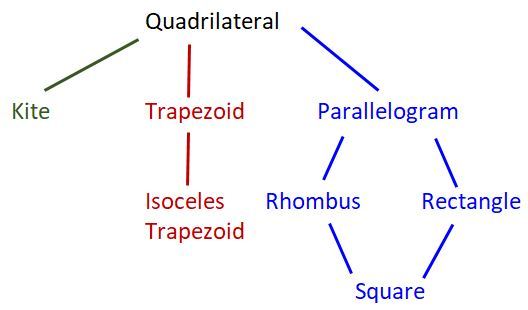 Area of a rectangle = base ✕ height

Area of a parallelogram = base ✕ height

A rhombus is a special case of a parallelogram with all sides being equal. So, area of a rhombus= base ✕ height

Area of a Kite.  The area of a kite is half the product of the diagonals.

We can split the kite in half (using one of the diagonals) to create a pair of congruent triangles.

Area of a Square

Area of a Rectangle

Area of a Trapezoids

Perimeter of a Rectangle

Perimeter of a Square

GE07      Length and width of a rectangle given area

GE08      Length and width of a rectangle given perimeter

AR12   Finding the base or height of a parallelogram.

Quadrilateral Classification: (regarding its interior angles)

Convex quadrilateral: all interior angles are less than 180°

Concave quadrilateral: one interior angle is bigger than 180°

AN18  Angles around a point

AN20  Missing Angle in a quadrilateral

The sum of the interior angles of any quadrilateral is 360°

AN20  Missing Angle in quadrilaterals