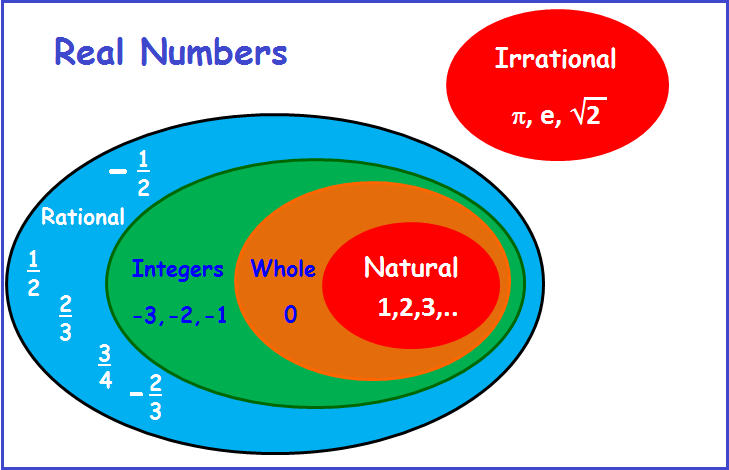 Natural Numbers:  Positive numbers from 1 and up, with no decimal or fractional part.

Whole Numbers: Positive numbers with no decimal or fractional part, including 0.

Integers: All the numbers with no decimal or fractional part (positive or negative).

Rational numbers:  any number that can be expressed as the quotient or fraction p/q of two integers, (i.e. as a ratio). Since q may be equal to 1, every integer is a rational number.  q is a natural number (non-zero) denominator.

When we divide numerator between denominator of a fractional number, we can have two cases: A decimal with a finite number of digits. (terminating decimal), or a decimal that repeats over and over again indefinitely (repeating decimal).

Irrational numbers: any number that cannot be exactly expressed as a ratio of two integers.

Real Numbers: All the numbers that can be represented on a number line.

IN01  The Real Number System 1 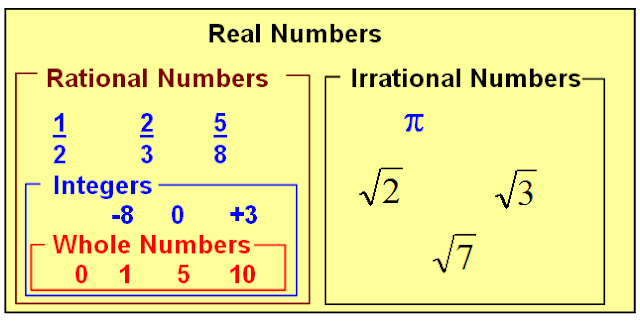 A number line is a way we can graphically represent real numbers.

Each point of the number line corresponds to a real number and vice versa.  There is an arbitrary point that we mark as zero and we call it origin.

Small marks are drawn at regular intervals; and below each mark, a progressive number is written starting from 0 (the origin).

A number line is a basic tool for teaching number concepts, such as comparing, ordering, addition, subtraction, multiplication, division, rounding, and so on.