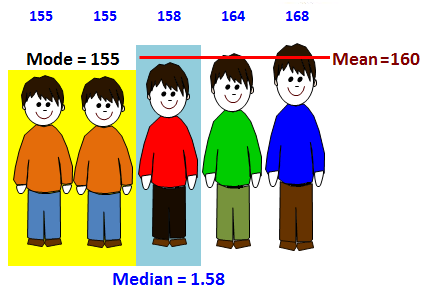 Mean. The average. (1) Add all the numbers (2) Divide the sum by the amount (how many) of numbers given.

Median.  Order the numbers, and then find the middle. If 2 numbers are in the middle add and divide by 2.

Mode.The number that occurs most frequently
(Repeat the most)

Range. Subtract the largest minus the smallest.    (Max   – Min)

Quartiles in statistics are values that divide your data into quarters.

Q3. The second highest 25% of numbers (above the median).

IQR is the difference between the first quartile and the third quartile of a set of data.

Measure and Representation of Data

To get a sense of the data’s distribution we use the five statistical summaries: 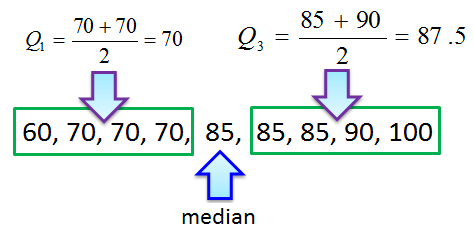 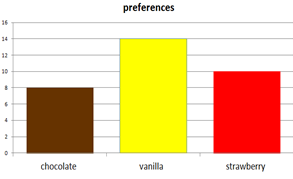 A special kind of bar graph that displays the frequency of data that has been organized into equal number groupings.  The number groupings cover all possible values of data, therefore there are no spaces between the bars. 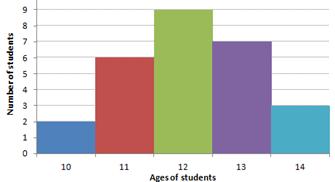 A Stem and Leaf Plot is a type of graph that is similar to a histogram but shows individual values.

A Box plot is a graphical representation of statistical data, that shows the minimum, first quartile, median, third quartile, and maximum. (sometimes is called a box-and-whisker plot).

Data, is the raw information from which statistics are created, (facts or numbers from which conclusions can be drawn).

Mean (“x-bar”) is the AVERAGE of a set of data (add all the numbers and divide by how many.

Median is the number in the “middle” when they are lined up in order. If there are two middle numbers, calculate the median by taking their average (mean).

Mode, (the most common) is the value that occurs the MOST in the set of data (we can have no mode, 1 mode, or more than 1 mode)

Range, is the difference between the smallest and largest values in a set of data

Outlier, is a number that does not fit in with others in its group.