Exponent.     A little number that tells you how many times you multiply a number by itself. 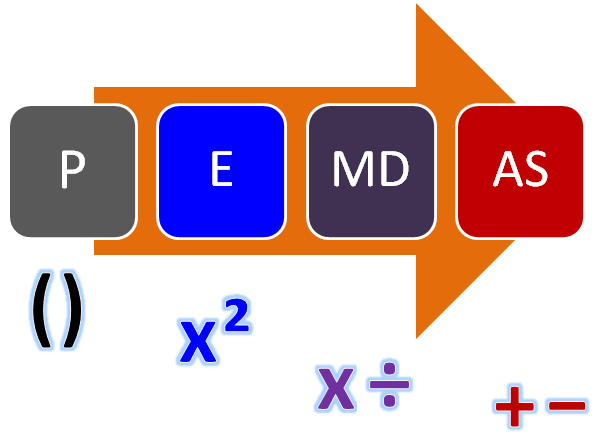 When evaluating algebraic expressions, we must follow a certain order of operations to obtain the right answer.

“PEMDAS”. (Acronym) It stands for “Parentheses, Exponents, Multiplication and Division, and Addition and Subtraction”

Expression. A mathematical sentence built up from constants, variables, and the algebraic operations

Evaluate an expression. Substitute numbers for the variables and follow the operation symbols to find the numerical value of the expression.

Equation. A mathematical sentence that equates one expression to another expression.

Equivalent expressions. Expressions that have the same value but are represented in a different format using the properties of numbers.

-Explain the difference between an expression and an equation.

-Use the properties of operations to create equivalent expressions.

Reason about and solve one-variable equations and inequalities

-Explain what an equation and inequality represent.

-Determine whether a given number makes an equation or inequality true.

-Explain what a variable represents.

-Explain the differences between an equation and an inequality.

-Write an inequality to represent a real-world problem.

-Identify multiple solutions to an inequality.

-Represent solutions of inequalities on a number line.